2 new priests ordained by the Catholic Diocese of Little Rock

Both men are recent graduates of Assumption Seminary in San Antonio.

Diocesan Bishop Anthony Taylor celebrated the multilingual Mass, which featured music in English, Spanish and Latin, with a touch of Greek as well.

For Nieto, a product of St. Raphael Parish of Springdale, Spanish is his first language. Wendel, a longtime member of Christ the King Parish in Little Rock, is a native English speaker but has studied Spanish extensively.

Hundreds attended the priestly ordination, including Archbishop Emeritus of Seattle, J. Peter Sartain; the Bishop of Shreveport, Francis I. Malone, and the Bishop-elect of Saint Augustine, Erik Pohlmeier.

Pohlmeier is the outgoing pastor of Christ the King Parish in Little Rock; Malone was his immediate predecessor.

For Sartain, the May 28 ordination was a kind of homecoming. The Memphis native served as Bishop of Little Rock from 2000 to 2006.

“Every time new priests are ordained it is a blessing for the whole state because these guys will be committed for life to the Diocese of Little Rock and that means they will always be there to serve the people here” , did he declare.

Malone emphasized the importance of the priesthood to the life of the Church.

Wendel and Nieto will bring comfort to those in grief and light in times of darkness, he said.

“The function of the priest is to bring people to God and to bring God to his people, and that’s what these two wonderful young men are going to do,” Malone said.

Wendel’s ordination was above all a source of joy for the bishop of Louisiana; he is the 11th priest that Christ the King has produced in the last decade. Malone has known Wendel since he was in kindergarten.

“He’s a joy-filled Christian” and he comes from a big family, Malone said.

“They are all deeply rooted in the faith of the Church,” he said.

The Diocese of Little Rock covers all 75 counties of Arkansas and includes more than 154,000 Catholics, who worship in 130 parishes and missions across the state. His website lists 139 priests.

Wendel and Nieto spent years studying so they could serve God’s people.

On Sunday, they returned to their parishes of origin to celebrate their first masses.

Wendel’s first assignment will be at St. Raphael Church where he will serve as associate pastor.

Nieto will be associate pastor at St. Theresa’s Church in Little Rock.

During the two-hour ordination service, Taylor questioned the priests who had helped train the two candidates about their merit for the mission.

Satisfied with their answers, Taylor said, “Relying on the help of the Lord God and our Savior Jesus Christ, we choose these men, our brethren, for the Order of the Priesthood.

Before going further, Taylor himself interviewed Wendel and Nieto, assuring their willingness “to exercise the ministry of the Word wisely in preaching and teaching, to celebrate the sacraments correctly and faithfully, to pray ceaselessly and to unite daily in the sacrifice of Christ, the High Priest, for the salvation of the world.”

Once Nieto and Wendel promised to respect and obey the bishop and his successors, they prostrated themselves before the altar while the litany of the saints was sung.

Those present asked Mary, the archangels and angels and a multitude of saints to intercede so that the two men would become worthy ministers.

Then the bishop laid his hands on their heads as they received strength from the Holy Spirit, then stepped aside so that dozens of brother priests could also lay hands on the new new priests.

After a prayer of consecration, the priests were dressed in chasubles (the large sleeveless outer garments worn when celebrating Mass) and stoles (a strip of cloth vaguely resembling a sash).

Once coated, they knelt again as Taylor anointed their hands with holy oil.

“The Lord Jesus Christ, whom the Father has anointed with the Holy Spirit and power, keep and preserve you, that you may sanctify the Christian people and offer sacrifices to God,” the bishop prayed.

The celebration was punctuated by the sounds of a pipe organ and the pews were filled with seminarians, nuns and members of the Knights of Columbus brandishing swords.

Afterwards, Wendel, 26, warmly welcomed Malone, who is not only a fellow member but also his former pastor, stopping to enjoy the presence of his parents and siblings.

Nieto, 32, walked straight up to his mother and blessed her, then briefly knelt in front of her. She kissed his hands.

Maria del Carmen Nieto Bautista, a single mother, raised her only child in San Juan del Rio, Queretaro, Mexico, about 100 miles northwest of Mexico City. Hoping to provide him with a better life, she immigrated to northwest Arkansas and found work. After being raised for two years by aunts, he joined his mother in Springdale, eventually graduating from Har-Ber High School.

After the mass was over, Nieto posed for photos with family and friends, greeting guests in English and Spanish.

Thanks to social media, the family who had been unable to travel to Arkansas were able to watch the event from a distance.

“I never imagined that my only son would become a priest, but it’s really beautiful and very exciting,” said Maria del Carmen Nieto Bautista at a reception afterwards. “I give thanks to God for all that my son has become and where he is right now.”

Paul Wendel called it a “beautiful day” for him, his wife and the whole Wendel clan.

“We both come from large Catholic families. I am the youngest of four boys and my wife is one of ten and as you saw they were all here,” he said. .

Malone’s example had a profound impact on Wendel’s son, he said.

“Daniel saw the joy in him and the joy of the Eucharist and being on the altar and his life and he wanted to emulate that,” he said.

When asked why he wanted to become a priest, Daniel Wendel replied, “Only for the love of God and the people of this diocese.”

“I know these people and they know me. … That’s where I grew up and that’s where he called me,” he said.

“This world desperately needs more people to know they are loved so we can all go back to heaven together,” he said.

Nieto said he hopes to help people who are suffering.

Asked to share his thoughts on the church, Nieto said, “It’s a hospital for souls.” 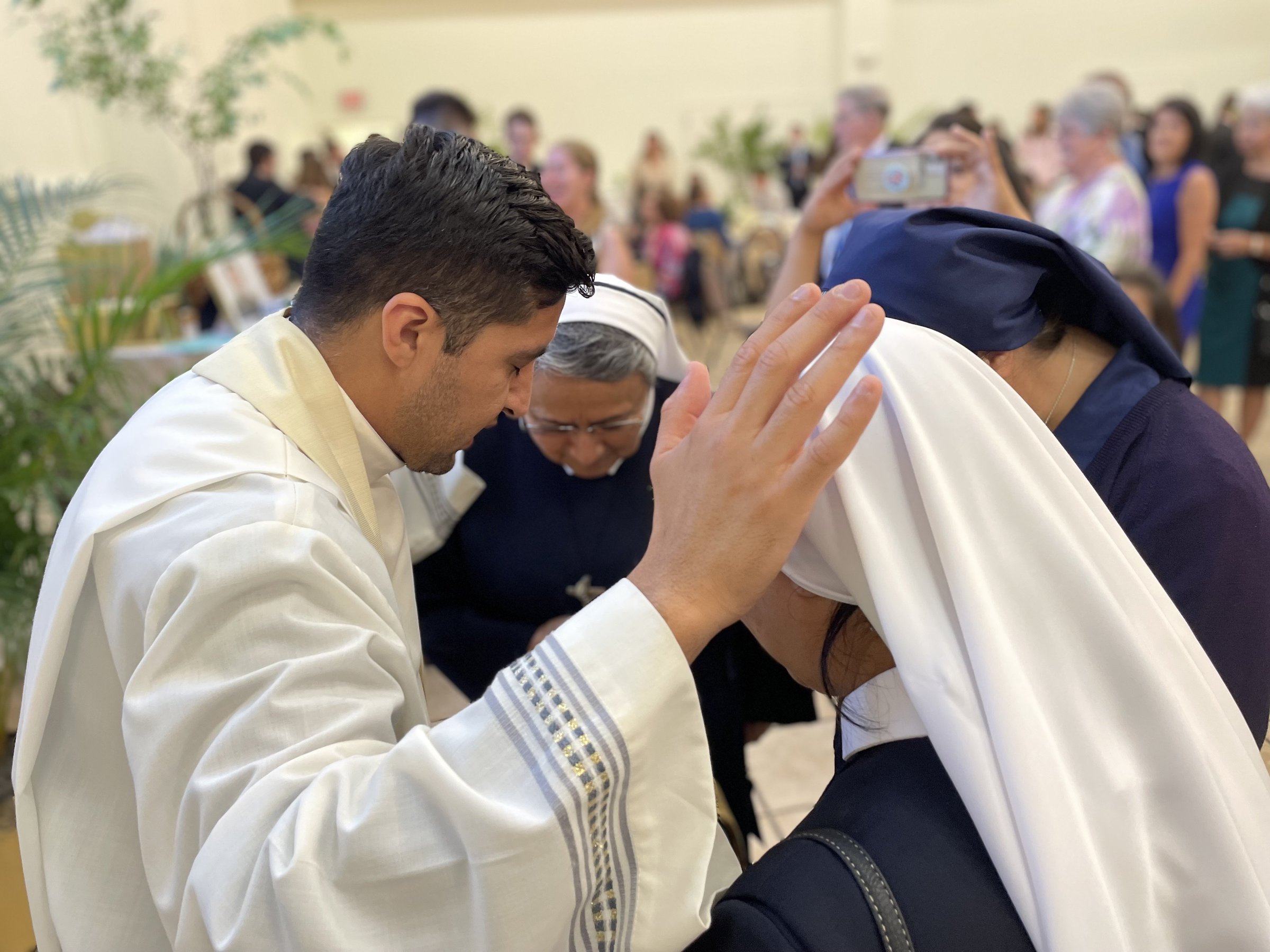 Father Jaime Nieto prays for the nuns at a reception after his ordination May 28 in Little Rock. People waited in a long line to greet him, many seeking a priestly blessing. (Arkansas Democrat-Gazette/Frank E. Lockwood) 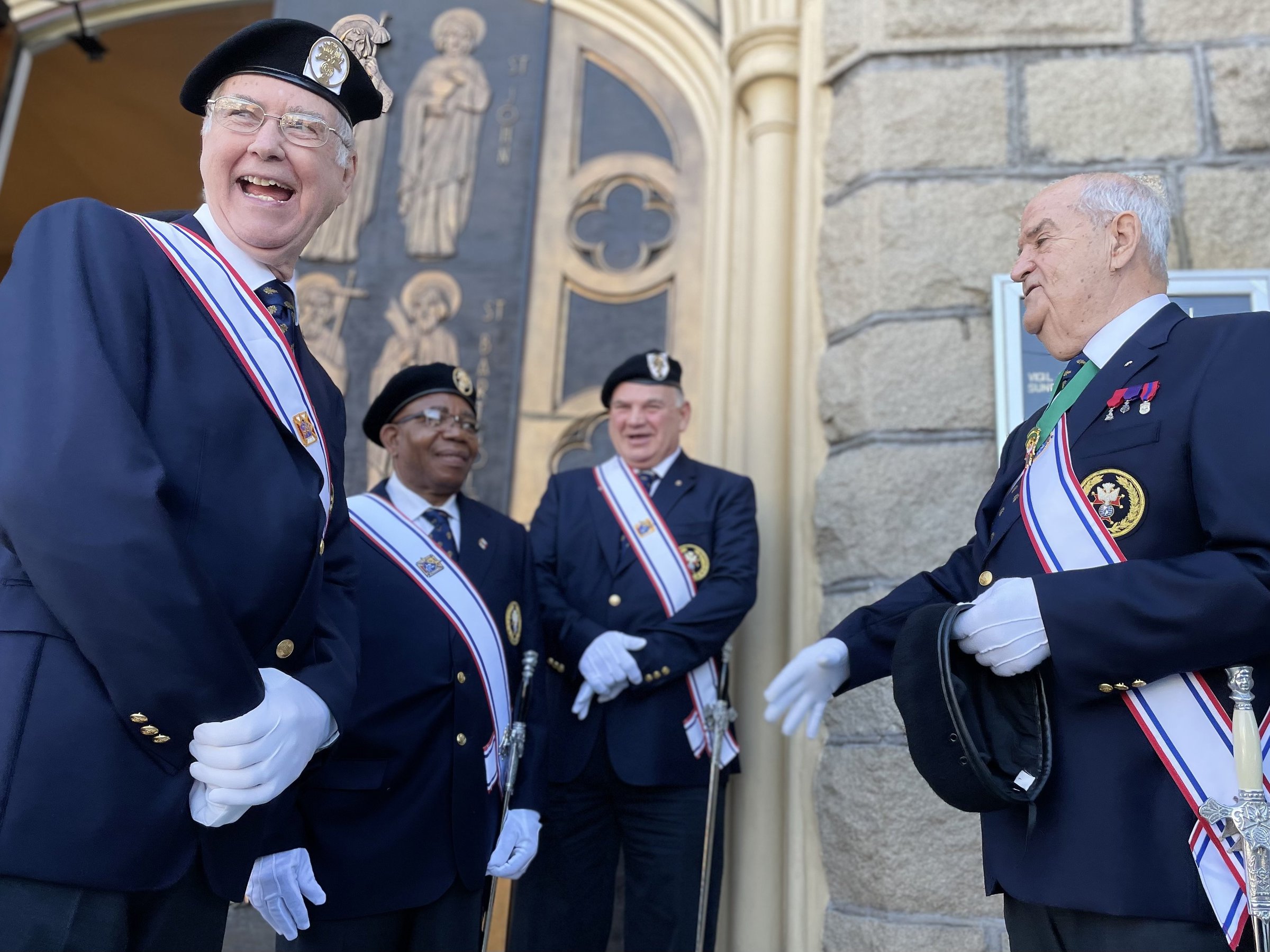 Members of the Knights of Columbus share a moment of relaxation outside St. Andrew’s Cathedral May 28 before the ordination of Father Jaime Nieto and Father Daniel Wendel. (Arkansas Democrat-Gazette/Frank E. Lockwood)