On San Sebastián’s famous Playa de la Concha, you might think summer is in full swing. The paddleboarders were out, no wetsuits between them, the joggers also in Lycra barely there, and plenty of swimmers, chief among them a group of portly old ladies wearing petal bathing caps who took to the sea as if it was a hot bath. Yet snow still dusted the Pyrenean foothills, which rise behind the town, and there was undoubtedly a lingering April chill despite the cloudless sky.

About a 30-minute walk from La Concha, across San Sebastian’s famous Zurriola Bridge with its green and white columns like art deco bowling pins, past Playa de la Zurriola, Avenida Ategorrieta feels distinctly suburban. The wide residential thoroughfare is lined with luxury houses and villas, and at No. 61 stands the Villa Soro hotel.

“A sleeping beauty”, says Andrés Soldevila of his family’s new project which, together with Sant Francesc and Can Ferrereta in Mallorca, brings his empire of boutique hotels to three. Beauty? I am not sure. Handsome, even eccentric, might best describe the late 19th-century mansion, commissioned by the wealthy Londaiz family and designed by architect-of-the-moment Luis Elizalde, who clearly had a fondness for the Victorian style. Down the road, at Palacio Miramar overlooking La Concha, the Spanish Royal Family were also on board, building their summer residence in the same vein as Villa Soro with steeply sloping gables, majestic arched entrances and mock Tudor half-timbering. And when fashionable queen Maria Cristina commissioned Pierre Ducasse to lay out the gardens at Miramar, the Londaiz family did the same at Villa Soro.

A grand expression of status is what Villa Soro used to be; inside too, where a mighty oak staircase rises from the entrance hall, a stained glass ceiling shows the Londaiz coat of arms and an unusual staircase chapel with more stained glass – this time depicting the Holy Family – throws a kind of blissful benevolence on arriving visitors.

Fortunately, the Londaiz family’s ostentation was tempered by the Soldevila family’s sophistication in their remodeling of the building’s former hotel interiors. The bedrooms, 25 in total – split between the main villa and a converted carriage house – are subtle and restrained in their use of color and Spanish linens. Numbers 12 and 13 with a terrace and a balcony are considered the best respectively, although number 22 on the top floor, with its huge window and herringbone ceiling, gets my vote.

Downstairs, the monochromatic lounge is the star of the show, where I sit, shivering, keeping a glass of rioja down for fear of upsetting the color palette. On the wall, anchored in this hotel in northern Spain, is a lithograph and woodcut by Eduardo Chillida, the famous Basque artist whose iron sculpture, El Peine del Vientoanchored to the rocks at the entrance to La Concha Bay, is an icon of local culture. While Chillida remains one of the biggest draws – the open-air museum dedicated to her work, Chillida Leku (museochillidaleku.com), run by renowned gallerists Hauser & Wirth, is a 15-minute drive away – it’s fellow Basque installation artist Cristina Iglesias who is making waves for her intricate new geological sculpture, Hondalea (Sea Abyss)housed in a restored lighthouse on Santa Clara Island in the middle of La Concha Bay.

● Best hotels in San Sebastian
● Can I travel to Spain? Entry requirements explained 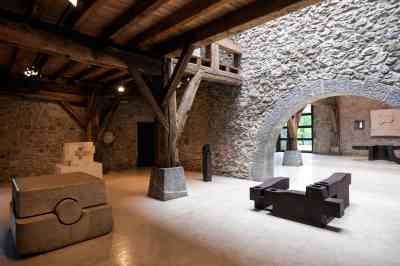 If it’s not the art, the food is surely San Sebastian’s magnetic attraction. “We are in the Disneyland of restaurants,” Andrés says over a plate of croquetas at Villa Soro. He has wisely decided to offer only light menus to his guests, knowing that most will eat elsewhere. Arzak, which boasts three of San Sebastian’s 19 Michelin stars, is a 15-minute walk away, if you can manage, unlike me, to secure a table. Instead, I snuck into Rekondo, another mainstay of the culinary scene famous the world over for its wine cellar, redesigned during lockdown by chef Iñaki Arrieta to better showcase its 100,000 bottles (rekondo.com).

But the old town of San Sebastian remains its beating gastronomic heart. Hitting the pintxo trail is a local ritual – the kind of Basque equivalent to a pub crawl but with better food and no beer. Pintxos, often a slice of baguette with any variety of toppings secured with a cocktail stick, have now evolved to include other more sophisticated tapas-style snacks, washed down with wine, txakoli (a sparkling local wine) or cider. Many bars have a specialty: La Cuchara de San Telmo is famous for its suckling pig and foie gras; Goiz Argi for the shrimp skewers; Casa Urola for artichokes; Borda Berri for pork ribs and ears; Ganbara for the croquetas; and La Viña for a melt-in-the-mouth cheesecake. I did them all, one after the other, until I felt like a portly old lady, ready to swim.

Pamela Goodman was a guest at Villa Soro, which offers double guest rooms from £125 (hotelvillasoro.com). Fly to Bilbao